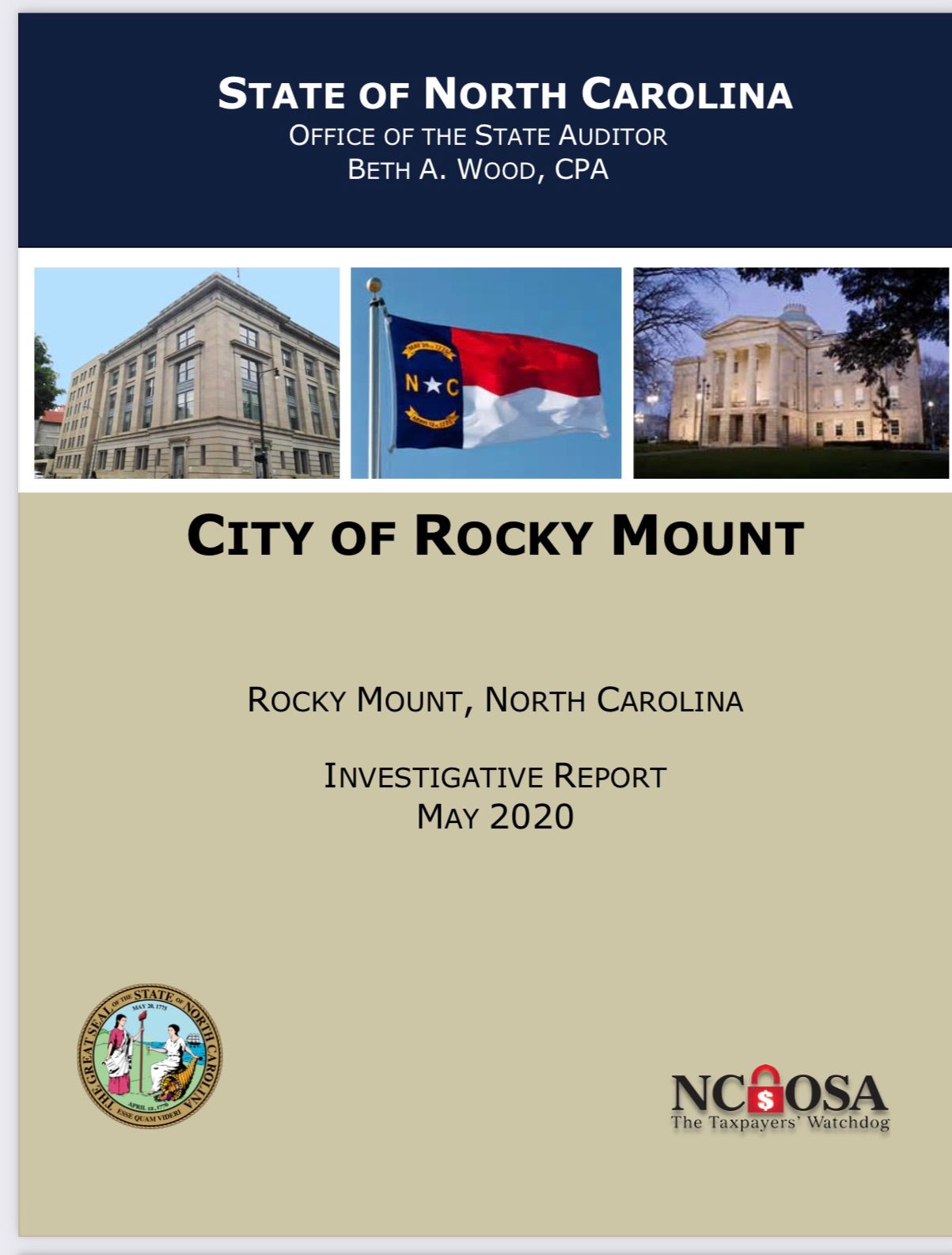 Rocky Mount, N.C.— The N.C. Office of the State Auditor released its findings today after an audit of the City of Rocky Mount’s finances started more than a year ago following a number of citizen complaints concerning misconduct by elected officials and employees of the City.

“The majority of the City Council have responded that they question the validity of these numbers and do not believe this audit was performed to the highest standards by the N.C. State Auditor,” says Mayor Sandy Roberson. “Furthermore, they believe that this was a targeted audit aimed at black leadership of our community.”

He continued to express his embarrassment at the allegations against Rocky Mount and his support of the N.C. Office of the State Auditor’s extensive experience and adequate resources to produce a report it has enough confidence in to release publicly.

“While I am thankful the total amount in question of $151,000 represents a small fraction of money relative to the annual budget of the City and that these items extend well back in time,” Roberson continues, “it’s still a lot of money in a poor city where the median household income is only $37,400 and a third of our citizens are living in poverty. Choosing between paying their bills or eating is a problem that real people here face.”

Rocky Mount is the 19th largest city in N.C. with a population 64% African American and 30% White. Situated halfway between N.Y. and Fla. and at the intersection of I-95 and I-64, Rocky Mount is positioning itself as a gateway for eastern N.C. as it redevelops its downtown attracting entrepreneurs and is beginning to land larger employers attracted to the location for its amenities and available undeveloped land.

“As an elected official working to strengthen this City, I believe those of us chosen by the citizens of Rocky Mount to lead their government should be held to a higher standard of ethics and integrity,” adds Roberson.

Regardless of one’s perspective on this matter, Roberson believes the NC Auditor’s report and the City’s response identifies the following needs:

Mayor Roberson proposes to address each of these issues together as a community by demanding change and transparency at every level, including:

In addition, Mayor Roberson reminds the residents of Rocky Mount that they have the following rights:

“It is time that everyone in Rocky Mount—and I mean everyone—has a voice in how this City moves forward together,” adds Roberson. “Let your opinion be heard. It is time for a change on how the City does business. I believe we can get through this tough time stronger as a community, as One Rocky Mount.”

Elected on the strength of his leadership supporting safer neighborhoods, economic development and job creation, stronger schools, workforce development and the community working together as One Rocky Mount, Mayor Sandy Roberson continues to focus on these issues in his first months of office. Drawing together a group of diverse community leaders from all sectors of Rocky Mount, Mayor Roberson initiated a Transition Team to work with him to research these critical issues, develop policies and create action plans to present to the City Council to engage and strengthen Rocky Mount. For more information, please visit www.sandyroberson.com.